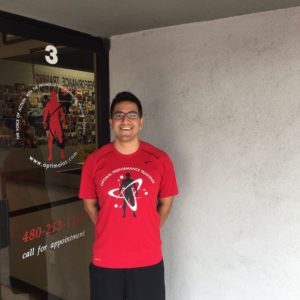 To get to the fitness equipment at the Optimal Performance Training gym in Chandler, clients have to pass through a black door inscribed with the Chinese symbol for ‘dojo’: You defeat the darkness inside of you, so the darkness outside of you will not break you.

Optimal Performance Training might not sound like an ordinary gym. But owner Joey Bellus is not an ordinary trainer. His unique philosophy of training aims to empower clients by merging high-quality physical fitness with emotional and mental well-being.

The gym’s motto is “The Voice of Action. With the Promise of Transformation. Through Integrity” because Bellus doesn’t just set out to change his clients’ body image or ego.

He wants to help his clients change their lives.

For years Bellus had tried to come to terms with an abusive past by making self-destructive decisions, before he met a woman who helped him turn his life around. Now, as a trainer and business owner, he aims to be that one person who can help his clients lead healthier and more productive lives.

Bellus had been working at 24-hour Fitness as a trainer for four years when a client asked him if he’d like to train people from his chiropractic office. Bellus jumped at the opportunity and quit his job.

“I knew I didn’t want to be in the corporate world,” Bellus said. “So I said sure, let’s try it.”

With $90 to his name and a 150 square-foot office space to work with, Bellus started Optimal Performance Training. Standing at 5’8” and sporting black-frame “hipster” glasses, Bellus said one of his earliest struggles was that potential clients would come into the gym and tell him he didn’t “look” like a trainer. But with the fitness credentials, a unique passion for helping people evolve, and a tireless energy for his work, Bellus moved to his current location on Hamilton Street and soon created a “family” of clients.

“It’s not just the physical training. It’s the motivation, the positive reinforcement,” said Janet Seidl, who has been training at Optimal Performance Training for over three years. “Joey’s very inspiring. Everybody feels good when they’re here.”

“Ever since I came here, I started to get a lot stronger, faster, and better,” said Maddie Seidl.

Kylie Seidl added, “Joey’s really motivational. Whenever you don’t think you can keep going, he always pushes you to do more, and then when you’re done you realize what a positive impact it had on you.”

On any given day at the gym, student athletes like Kylie and Maddie train alongside older individuals and individuals struggling with being overweight. Jane Johnson, who came to Optimal Performance Training to improve her weight and health, said that her experience has been phenomenal.

“I have always been really intimidated by gyms, but they take the intimidation factor away,” Johnson said. “I’ve lost 50 pounds. I’m just a new person.”

Jerome Carino, an ASU senior majoring in exercise and wellness, chose to complete his required internship with Bellus and said that decision has helped him come into his own as a trainer. Carino attributes part of that transformation to the environment at Optimal Performance Training.

“This place is one of a kind. You come in here, and it’s like you never left home,” Carino said. “The biggest thing that sets OPT apart from other gyms is that sense of family, connection, togetherness.”

Bellus said he pushes for a positive family environment at Optimal Performance Training because his own childhood family was anything but “optimal.” He was abused for four years of his life, and other domestic issues shattered the family’s stability.

“Emotionally there was no availability there,” Bellus said. “I was very angry, very shut off. There’s a period of my life when I was high every single day for like two years.”

As Bellus got older, he created a dysfunctional life for himself.

“Drinking was a huge escape for me, my biggest outlet,” he said, “which caused me to have a lot of unhealthy relationships, which led me to a very dark space in my life, to depression and being isolated from people.”

On a trip to Hawaii to visit a friend, Bellus met the woman who would help him change direction. Her name was Marlo Lundell.

“She told me the way I was living my life was so wrong,” Bellus said of Lundell. “I tell people all the time, she’s the lady that saved my life.”

Lundell introduced Bellus to the Landmark Education, a program that helped him heal through self-reflection and action. Bellus said the program helped him realize that to grow as a person, he had to confront the darkest side of himself.

“Most people want to live their lives only showing you their best side,” Bellus said. “But everyone’s going to make mistakes. If you really want to grow as a person, bring light to the darkest of spaces, and that’s where you’re going to find the most power in who you really are as a person.”

Bellus continued his journey of self-development by reading the works of spiritual leaders like Eckhart Tolle and Alan Watts. He started looking for ways to ‘give back’ to the community as well.

Two years ago, Bellus founded the Help-A-Human Program, in which he and his clients at Optimal Performance Training stuffed pillowcases full of supplies for Phoenix’s homeless. Once a month, the volunteers traveled to Margaret T. Hance Park to hand out the supplies and became known affectionately as the “pillowcase people.” Eventually the Help-A-Human operation became so big that the Phoenix police department shut it down, according to Bellus. But the experience left its impact on Bellus.

“I had three guys that I became really close with out there, who told me their whole life story and knew mine,” Bellus said. “When you get to talk to them, you see how easily it could have been you. You literally see, ‘Wow, if one little thing would have changed in my life, I could have easily ended up here.’”

Ray, one of Phoenix’s homeless who had served in the army for over 22 years, said that he hadn’t trusted the “pillowcase people” until he realized they genuinely wanted to hang out and talk. Dressed in a green cargo-like jacket and with his glasses in his pocket, Ray lit up when he described how

Bellus and the volunteers would on occasion take him and some of the other homeless out to restaurants.

“When you sit down with someone, the Bible says you’re family or a really close friend,” Ray said. “It’s called a brotherly bond.”

In addition to helping the homeless, Bellus also started working two days a week with children at the Autism Academy. He said his work has been challenging, fulfilling, and humbling.

“The simplest things that whoever else can do, they might find very challenging,” Bellus said. “It’s been such a unique opportunity for me to step back. It’s taught me to absolutely be more patient and more creative…but also to have fun with it.”

Bellus is also a leader for the Global Citizens Network and has journeyed twice to help impoverished families in Peru. While there, he taught physical education classes to the community’s children and also helped in the construction of local schools. Bellus said that the program has helped him learn more about creating authentic interaction with people.

“When you’re there, it is a connection with the community,” he said.

In the future, Bellus intends to continue expanding his vision for O.P.T, working with his second family in Peru, and learning to salsa dance and speak Spanish.

He also plans to continue changing the world one person at a time.

“I lead by action, by example,” Bellus said. “There are so many bad leaders in the world, fake leaders. But I’m going to lead you because I’ve been through it and I have nothing to hide.”

Whether posting others’ victories on his Facebook page or speaking his poetry at Open Mic nights, Bellus believes that people have to be self-expressed in order to fully live.

“I always put myself out there because I never know who I might affect,” Bellus said. “As I was growing up, I didn’t have a mentor. I didn’t have a person to look up to. So for me, if I can help somebody so they don’t have to walk the same path that I did, then it means more to me than anything.”